An elderly gentleman, living in a remote English village, was feeling a little vulnerable.

Although fit and active, he wisely (and bravely perhaps) acknowledged that he isn’t as nimble as he once was.

His house is set in a large estate, with separate workshop, garage and office facilities in adjacent buildings.

The gentleman worried that if he had an accident or fell ill he may not be able to raise the alarm in time for family or emergency services to reach him.

After careful research he decided to purchase a Limmex Emergency Watch, a Swiss invention that looks great at the same time as being a potential lifesaver. 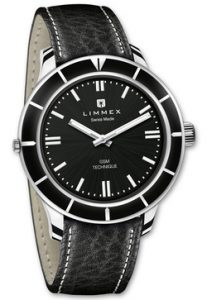 A Limmex watch does more than just tell the time; you can request assistance via the mobile phone network at the push of a button.

It has a built-in loudspeaker and microphone that allows you to speak directly to the person on the other end of the call.

There is a good mobile phone signal in the area where the gentleman lives, which allows emergency calls to be made and received in all of the buildings.

Also included in the watch is a GPS receiver that accurately pinpoints the wearer’s location when not inside a building.

However, due to the blocking effect of the building structure, there was no GPS signal inside at all. Unless the wristwatch has a clear view of the sky, it isn’t able to pinpoint its position.

Now that isn’t a failing as far as the watch is concerned; it is in fact the lack of GPS signals inside many buildings which is a problem for virtually all GPS-enabled devices.

A repeater system relays signal into the building so there is no need to be outside for the GPS device to operate.

FalTech specified separate repeater systems to cover each of the four main zones in which the gentleman operates; the house, the office, the garage and the workshop.

Each system ensures that:

• Any emergency calls made will indicate the wearer’s exact location

• When leaving the building the watch already has GPS lock from the repeater system, hence zero satellite acquisition delay – no gap in GPS coverage.

The installation of all four systems was completed in one day by a professional installation company that has a long track record of working with FalTech to install such systems.

The gentleman now has the peace of mind that his emergency watch will indicate his location at all times, even when indoors.