In general, a GPS receiving device uses signal received from at least four satellites to compute latitude, longitude, altitude, and time.  The basic GPS service provides users with approximately 3-5 meter positional accuracy, 95% of the time, anywhere on or near the surface of the earth.
There are several reasons why you could be experiencing an inaccurate GPS location since devices can be affected by a variety of factors when processing information and displaying it accurately.

Here are four potential reasons why your GPS device may be inaccurate.

Signal obstruction is when physical structures prevent GPS satellite signals from reaching the receiver. These obstacles include, but are not limited to:

In a situation where not enough signals are being received, the device may struggle to calculate accurate location information, and may indicate “GPS signal lost” at certain points.

To solve this problem, try and put your GPS device in a location where it has an uninterrupted view of the sky. Some people benefit from putting their personal GPS receiver in an outer pocket of their clothing, or in the outside pocket of a backpack.

We generally have no control over the effects of GPS signal obstruction, but we can be mindful of how these factors affect signal reception.  Some obstructions – such as tall buildings in downtown locations – are unavoidable so we should be aware that GPS accuracy can be affected by signal path obstruction.

Accurate GPS positioning is based on the notion that signals travel straight from the satellite to the receiver.

However, GPS satellite signals are subject to reflection and diffraction like any other type of electromagnetic waves. Multipath errors result from interference between radio waves which have travelled paths of different lengths between the transmitter (the satellite) and the receiver.

In a built-up area such as a city centre, a street that is sided by high buildings is known as an urban canyon. The result is a barrage of signals arriving at the receiver; some arriving directly from the satellite and others by more circuitous routes.

This has a similar effect to the “ghosting” you might see on a TV screen. A ghost is a replica of the transmitted image, offset in position, that is superimposed on top of the main image.

It is caused when a TV signal travels by two or more different paths to the receiving antenna, arriving at slightly different times. The signal can bounce off heavy precipitation, for example, on its way to the receiver, resulting in image ghosting.

The effects of multipath can result in your GPS device miscalculating its position because some of the received signals may have travelled from feet to miles further to get to you, compared to the direct line-of-sight signal path.

Multipath errors can cause your GPS to report a greater distance than you’ve actually travelled since signals have bounced between various surfaces and have been conjoined to determine your overall distance.

Some more sophisticated receivers use a range of signal processing methods to ensure that they only consider the earliest arriving signals, i.e. the direct one.

When switching a GPS receiver on for the first time since manufacture, after a factory reset, or after a period of time powered off, it can take several minutes to acquire an accurate positional fix while it goes through the cold start routine.

During this time, a GNSS receiver can be temporarily inaccurate while it downloads enough data to allow it to indicate its location.

Did you ever take a satnav device out of the car glove box, dust it off, switch it on and stick it to the car windscreen, then yell at it for taking too long to let you know where you are?

In common with most GPS receivers, a portable satnav device needs to download almanac data from satellites when first switched on.

Generally, an almanac is defined as an annual calendar containing important dates and statistical information such as astronomical data and tide tables. In the context of GNSS, the almanac is a regularly updated schedule of satellite orbital parameters for use by GNSS receivers.

A copy of the almanac is held on every single satellite and contains coarse orbit and status information for every satellite in the constellation; hence the receiver can obtain this data from any satellite that it has visibility of.

The data transfer speed from satellite to receiver is quite slow and can take up to 12.5 minutes to complete as the receiver builds up the Almanac database.

The terms GNSS and GPS seem to be interchangeable – what is the difference between GNSS and GPS?

In this case, a receiver is powered up and has valid time and almanac data stored within.

It now needs more precise and detailed information such as the orbital position of each satellite, the week number, accuracy, satellite health, and other orbital parameters.  This is known as the ephemeris data, and forms part of the information contained in the signal transmitted by each satellite.

If a GPS receiver has been under cover for a while, its ephemeris data may be out of date, partly because the satellites that were in view the last time it was out in the open have moved along their orbit. Now the receiver is outdoors again, with a clear sky view, it may be receiving signals from a completely different set of satellites overhead.

It can take up to three minutes for a device to obtain this information and establish an accurate fix, possibly longer if it is in a moving vehicle.

An example of how this can cause a problem is where GPS tracking devices are fitted in fire appliances. When the appliance leaves the fire station, it can take several minutes before the firefighting crew has fully accurate positional information available via their in-cab mobile data terminal (MDT).

This “satellite acquisition delay” means that fire crews are navigating to an incident without the confidence of GPS guidance, and the command & control centre don’t know exactly where their asset (the appliance) is.

FalTech has extensive experience of solving this issue by installing GPS repeater systems in fire stations.

Similar problems exist for police officers with GPS-enabled radios that don’t receive a signal when indoors.

These are four of the main reasons why your GPS signal might be inaccurate. If you’re having problems with yours, hopefully this list is helpful and goes some way to explaining why it may be happening. 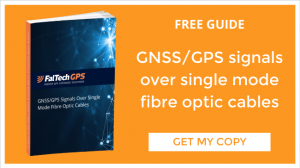